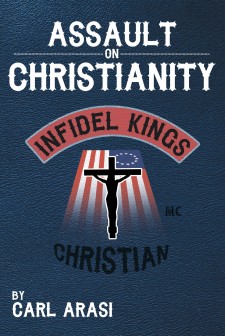 Recent release "Assault on Christianity" from Page Publishing author Carl Arasi is a white-knuckled ride across southern New Jersey and the United States as The Infidel Kings come to the rescue of persecuted Christian practitioners against those who seek to inhibit them.

SEMMES, Ala., February 8, 2019 (Newswire.com) - Carl Arasi, a seventy-two-year-old lifelong rebel with a background in driving semi-trucks, has completed his new book “Assault on Christianity”: a novel that proposes a shift in balance in the United States where malevolent sects of Islam inflict inhumane treatment upon those who do not ascribe to their extremist philosophies.

“Throughout history, there have been examples of Christians becoming the targets of genocide,” Carl Arasi introduced his inspiration for his novel. “From being put into an arena with lions, to Mongol and Islamic hordes that killed them during conquests. This book supposes that there’s an Islamic uprising in the US and Christians are again the focus of pogroms.”

Published by New York City-based Page Publishing, Carl Arasi’s gruesome tale follows The Infidel Kings, a ragtag group of bikers who come to the aid of those whose freedoms—and very lives—are at stake. The book leaves off with a cliffhanger, suggesting that this is the first in a series from the author.

“Read about a small band of bikers that take on all enemies of Christianity with cunning and brutality,” Arasi explained of his book.

Readers who wish to experience this imaginative work can purchase “Assault on Christianity” at bookstores everywhere, or online at the Apple iTunes store, Amazon, Google Play or Barnes and Noble.