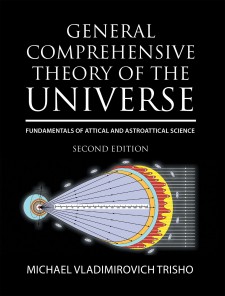 Recent release "General Comprehensive Theory Of The Universe: Fundamentals of Attical And Astroattical Science" from Page Publishing, author Michael Vladimirovich Trisho is a profound narrative that tackles the universal laws pertaining to space and celestial framework of the Universe.

PALM BAY, Fla., October 5, 2018 (Newswire.com) - Michael Vladimirovich Trisho, a passionate researcher of space mystery and a dedicated writer, has completed his new book “General Comprehensive Theory Of The Universe: Fundamentals Of Attical And Astroattical Science”: a cerebral compendium that explores the nature of astronomical and Attical Science in the hopes of better explaining the universe’s architecture to man.

Author Trisho presents a comprehensive collation of knowledge using mathematical and physical quantities for a cohesive grasping of information: “In distinction to Physical and Astrophysical Science which explore the laws and regulations governing the matter and energy arising from matter, as a base upon which planets and stars of the Universe evolved and exist, in accordance to the Law of Gravitation, Attical and Astroattical Science explore the laws and regulation governing space and the energy arising from space, which led to the evolvement of matter, and formation of the bridge of balance between the mater, energy and space in the form of atom particle – the base, upon which planets and stars evolved, in accordance to the Law of Absolute Equilibrium.

Attical and Astroattical Science is the product of spiritual vision’s unique ability to read the laws of Nature and the Universe beyond the material origin.”

"General Comprehensive Theory of the Universe: Fundamentals of Attical and Astroattical Science" explores the beginning and development of the Material Universe from the perspective of space and matter properties to build the magnetic bridges and systems of balance through energy fields in the form of atoms, celestial bodies, and galaxies.

According to 7th Physical Principles that govern the magnetic systems and magnetic bridges of balance, all celestial bodies within the Universe possess a magnetically hot, enlightened side, including the magnetically cold dark side, with the exception of dead celestial bodies that are in the stages of chain decay. This, in other words, means that Planet Earth does not move around the Sun, because if it does, we would be able to see the opposite, dark side of the Sun.

The described makeup of the magnetic systems and bridges of balance between matter and nuclear energy, and matter and static energy, in the form of a magnetic interlock between the positive and negative magnetic bonds, gives the atom particle the miraculous ability to engage in chemical reactions in order to form a variety of new compounds, which are the building blocks of celestial bodies and stars.

From the perspective of revealed knowledge Astroattical Science’s analysis of human activities upon Earth indicates that these activities are detrimental to the preservation of the planet. Moreover, since adopting a new way of life-based upon industrialization, humankind’s obsession with the destruction of Earth became an unconscious, ultimate goal. Taking into account that the Earth is the product of many billions of years of geological, atmospheric, and biological development, the scale of planetary destruction perpetrated by humankind within less than two centuries since the beginning of the industrialization era is so huge that Astroattical Science finds the planet’s magnetic system is on the brink of breakdown. Subsequently, Astroattical Science uses this opportunity to pinpoint a number of Original Order Codes breaches by that threaten life conditions upon the Earth.

Published by New York City-based Page Publishing, Michael Vladimirovich Trisho’s intellectual opus aims to delve into the astounding birth of life and material existence and shows how different aspects sum up as a whole in defining the true essence of the universe.

Readers who wish to experience this intensive work can purchase “General Comprehensive Theory Of The Universe: Fundamentals Of Attical And Astroattical Science” at bookstores everywhere, or online at the Apple iTunes store, Amazon, Google Play, or Barnes and Noble.